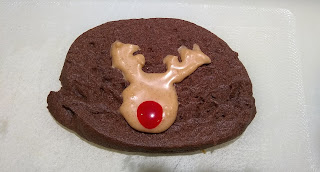 Cute for hunting season or, depending on your humour, Christmas by adding a dab of red icing for a nose (though I was jokingly told by one of my aunts that I’d ruined Christmas). This was my first attempt at a cookie stencil, and while I won’t start selling on eBay any time soon, I’m pleased with the result.

- antlered deer head stencil, head on, not profile. I found mine in a jar of Nutella a few years back

- red icing in a squeeze bottle (I used Twinkle cookie icing, which I picked up at Walmart)

I’m not giving exact quantities because it depends on how many cookies you’re making. The cocoa is just to give colour, so add as much or as little as you like. The same with the cinnamon, which will add a warm red-brown colour.

Combine icing sugar and cocoa in a bowl. Add water a few drops at a time to form a stiff icing. You want it stiff enough to hold its shape.

Hold stencil on cookie to be decorated. Drop a spoonful of icing in the middle. Use scraper to spread it so the entire area of the stencil hole is covered with a thin layer of icing. Carefully remove stencil by lifting straight up. Rinse and repeat. Once icing is dry to the touch, you can use the red icing to add a nose to the deer, if desired.

Kate Tompkins
I'm a freelance writer/editor who loves classic cars, easy recipes, travel, and a good book. Preferably all on the same weekend.